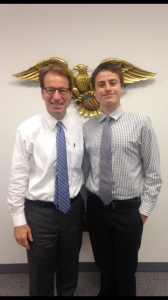 2014 at 1:00 PM, I met with my representative Peter Roskam at his office which resides at a small city airport in West Chicago. After the initial greetings my parents and I told him about my Tourette's Syndrome. The first thing I mentioned was how it impacted my life before my diagnosis; how uneducated teachers and doctors resulted in me being sent to a highly restricted school. He was very engaged in the discussion and asked a lot of very good questions. I emphasized to Congressman Roskam that it is very important to have doctors and schools educated about what Tourette's is and how to properly diagnose it. My story really seemed to peek his interest and he was in agreement that education is key to a proper diagnosis and proper advocacy for people with Tourette's. We continued to talked about the Tourette's Syndrome Caucus and the CARE act. He said he would definitely join the caucus and would look into the CARE Act. He went on to tell me how important it is to bring issues such as TS and its impact on people's lives to his attention so that he can take it into consideration when voting in DC.